I recently came across this article in Time and, frankly, was pretty horrified.  I immediately set out to change the way that I clean my towels.  Something that really, truly cleans the towels, but is still environmentally friendly.  After a bit of research and testing, I came up with this routine and method to wash towels. 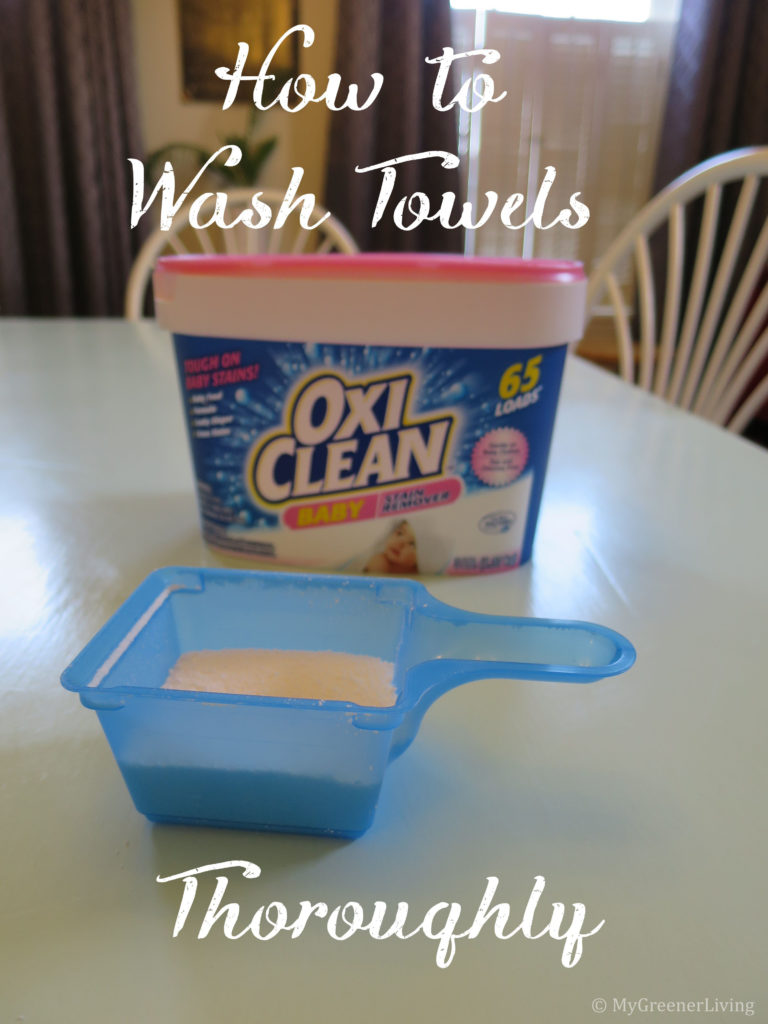 I had always assumed that since I used a towel after washing my hands or body, that the towel stayed pretty clean.  I was not thinking about the fact that crazy amounts of bacteria live on your skin all the time – even after you’ve just soaped up in the shower or scrubbed your hands.  As the Time article states, this is because most people do not thoroughly scrub their hands every time. So, when you dry your body and hands, you transfer the bacteria onto the towel.  Where the bacteria can multiply, because towels stay moist for a while.  Not to mention, most towels are kept in bathrooms/near toilets, so every time you flush the toilet, bacteria and microorganisms spread onto pretty much all surfaces.  Ok, that is graphic enough for this post.  Sorry.  I hope you weren’t eating while reading this.

Anyway.  Towels become pretty gross, pretty quickly.  I believe staying healthy helps one to be “green” and frugal.  Seriously, I struggle with non-(synthetic) cehmical options for treating ailments, and I go though way too many tissues when I get sick!  So I needed a good, environmentally friendly way to clean my towels.

First, I always wash towels separately from clothing, because I clean them differently than regular clothes.  My post with the laundry detergent recipe talks about how I wash clothes.

A microbiologist interviewed for the Time article recommends washing with hot water and oxygenated bleach.  Which most people know as the active ingredient in Oxy Clean.

Oxygenated bleach can be liquid or powder.  Liquid has a shelf life of only a few months, or less.  Powdered is more stable, with a shelf life of a couple years,  So I decided to use powdered form.  Note that, when oxygenated bleach breaks down, the resultant products are quite safe: liquid becomes oxygen and water, powdered becomes oxygen and natural soda ash (also known as washing soda, or sodium carbonate).  So there is no danger to the break down, but the product becomes ineffective at cleaning the way that oxygen bleach cleans.

I searched the Environmental Working Group Consumer Guide for cleaning to find a healthy and safe oxygenated bleach.  I found two that have only two ingredients: sodium carbonate peroxyhydrate (also called sodium percarbonate) (the ingredient that releases oxygen when in contact with water), and sodium carbonate (washing soda, or soda ash).  These two are OxiClean Baby and LA’s Totally Awesome Oxygen Base Cleaner.  However, I located some of LA’s Totally Awesome Oxygen Base Cleaner, and it definitely has more than 2 ingredients.  It has fragrance.  I contacted the manufacturer and they sent me the Material Safety Data Sheet.  The cleaner contains a 3rd ingredient: Ethoxylated Alcohol.  Which has an EWG rating of C.

My choice of oxygen bleach is:

I currently use OxiClean Baby because it was the only EWG A rated oxygen cleaner that I came across and was able to verify ingredients with the manufacturer.  From here on, when I reference “oxiclean,” I am referring to OxiClean Baby or simply sodium percarbonate mixed with sodium carbonate. 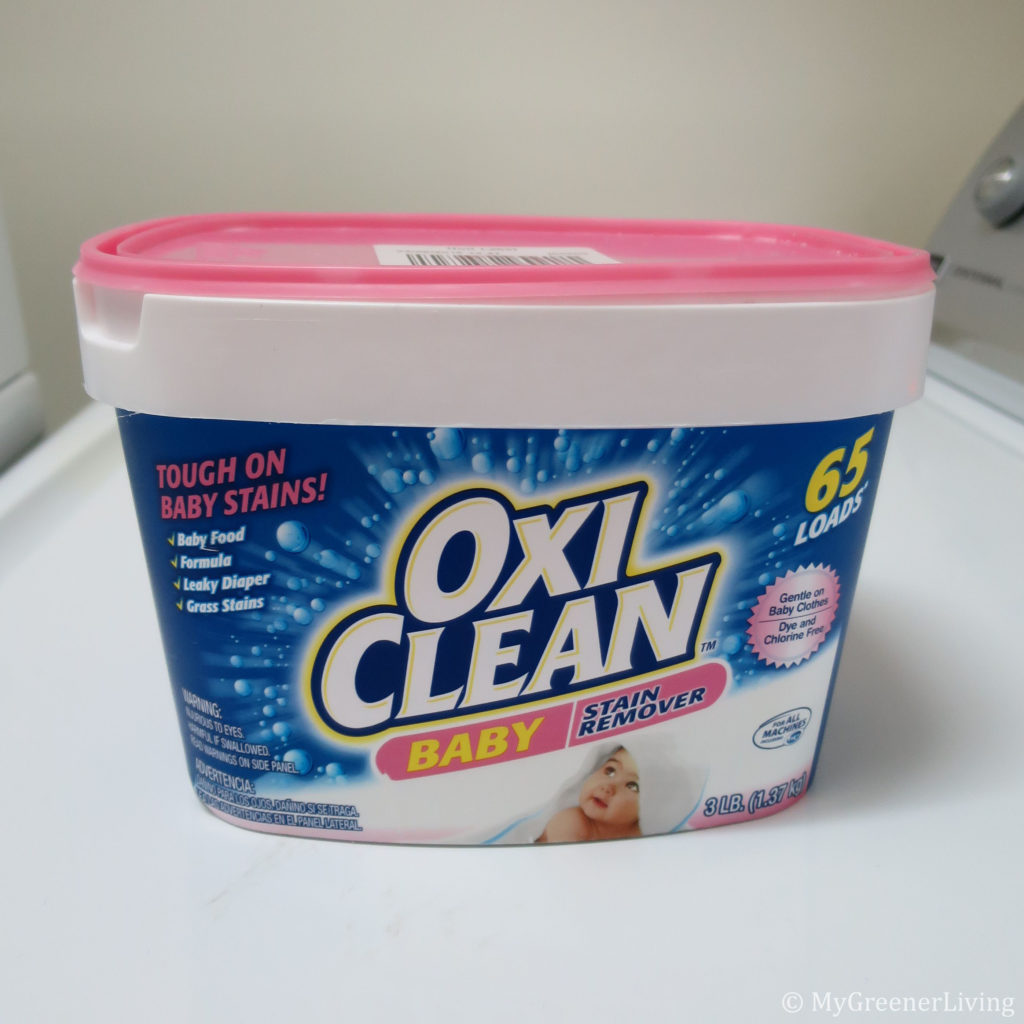 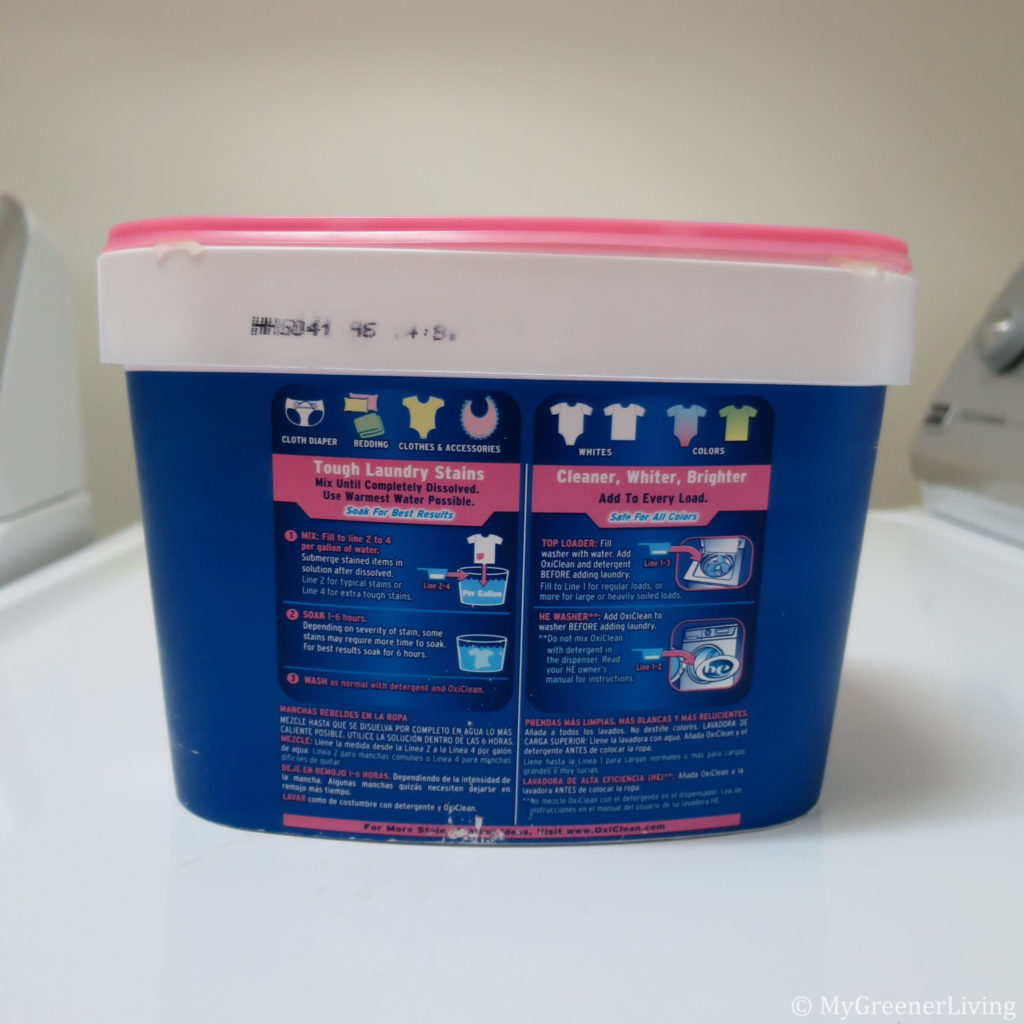 How to wash with oxygen bleach

Per guidance from the scientists in the Time article, I wash towels with hot water and oxygenated bleach, and I let the towels soak in the hot water with detergent and oxygen bleach for at least 1 hour or overnight.  If I had a washing machine that allowed soaking, I would scoop OxiClean to about half full (between the 2nd or 3rd line – per the package instructions) into the washer, pour 2-3 Tbsp of my liquid laundry detergent into the washer, and fill with hot water.  Once the washer was partly filled, I would add towels, allow to finish filling, then let soak for at least 1 hour or overnight. 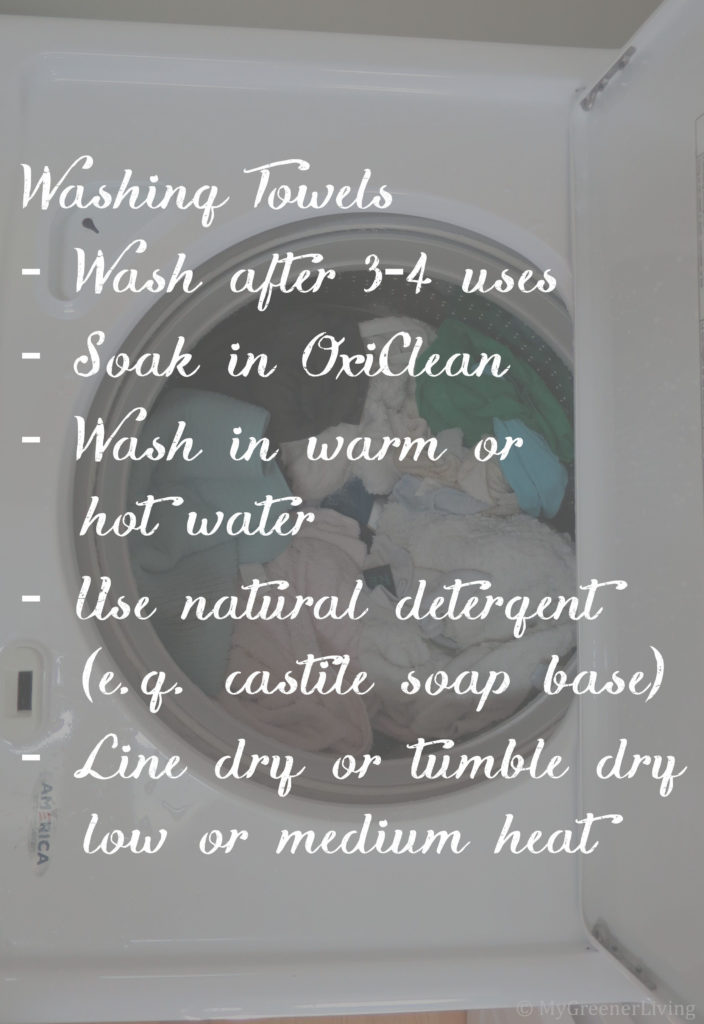 But, my Maytag Ecoconserve washer does not allow you to soak anything in it.  In fact, if you try to trick it by letting it fill, then “pause” the cycle, after about 15 minutes the washer automatically drains.  And there is no way to stop it.  I’m not going to lie.  I felt really guilty for wasting 26 gallons of water the day that I discovered this.  I stood there watching the water drain.  Trying, and failing, to figure out a way to stop it.  Sometimes I really hate this new “smart” technology.  Anyone want to trade me their old reliable washer for my shiny new “smart” one?  I digress.  Sorry. 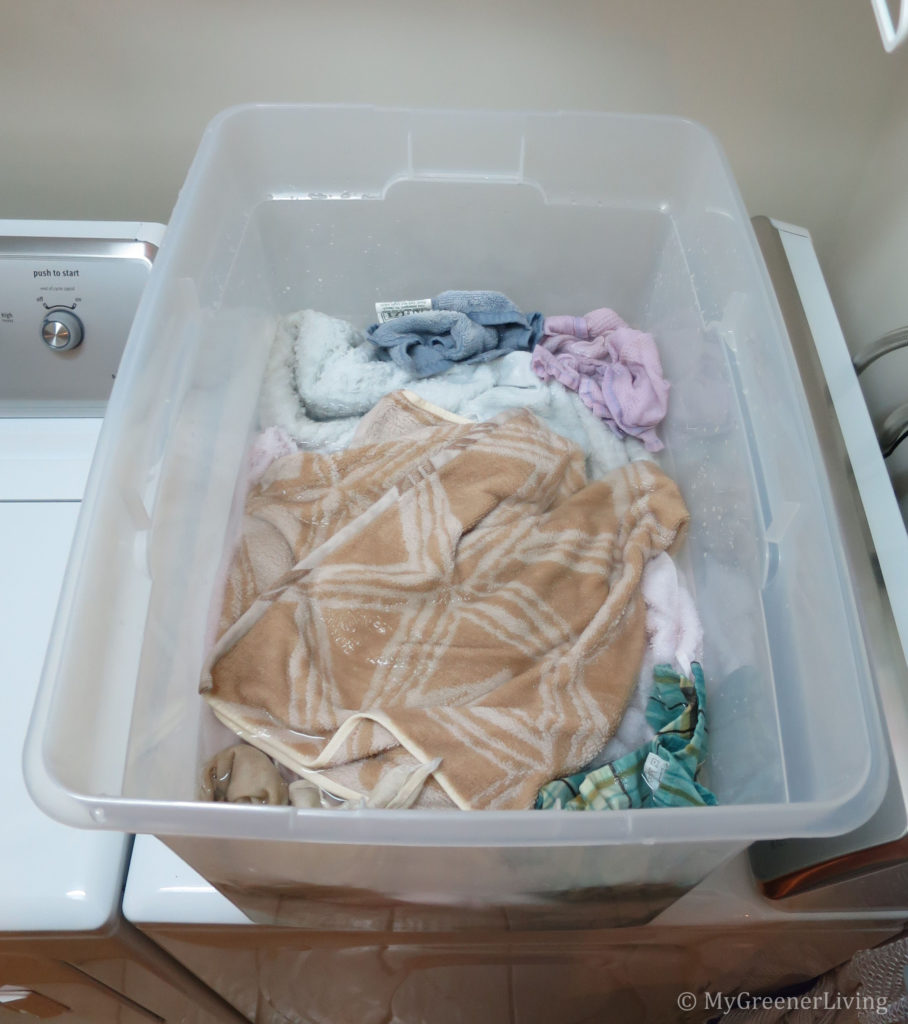 So, with my washer that does not let me soak, I either just run the cycle immediately and the towels “soak” about 20-30 minutes during the full and wash cycle, or I soak outside my washer.  Usually I do the latter, using a big plastic tote into which I dissolve the OxiClean in water, add towels, cover with water, and let soak.  I then put detergent in my washer, load the towels into the washer, and machine wash my towels. 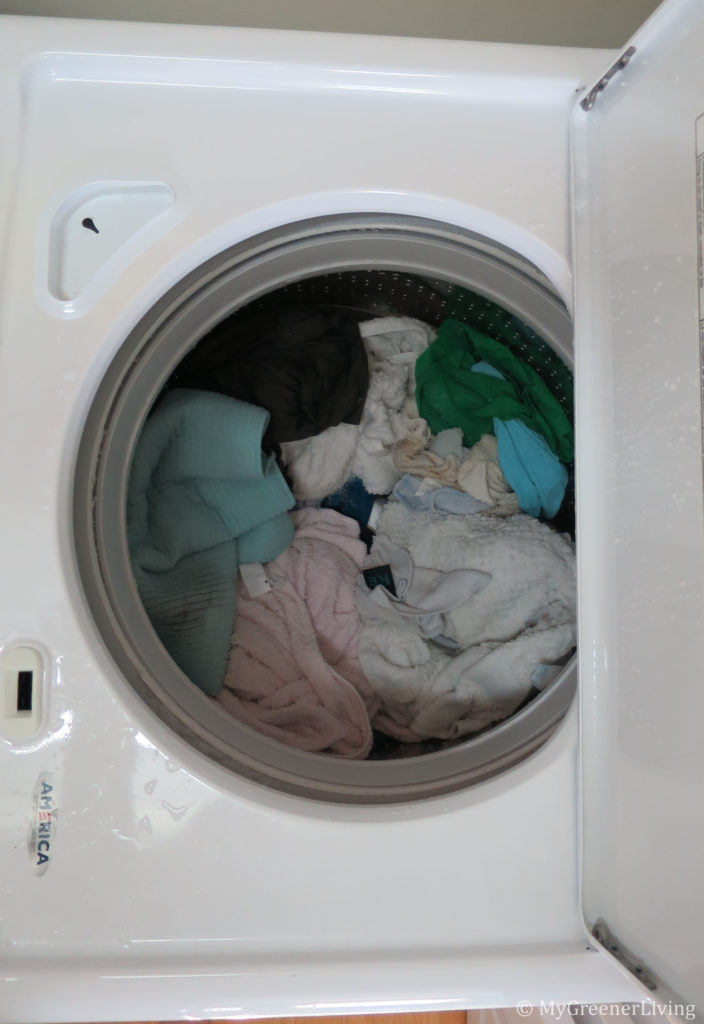 The Time article recommends high heat drying as an additional method for killing bacteria and pathogens.  I elect for a compromise between the energy usage of high heat setting on a washing machine and the very environmentally friendly method of air drying.  I hang towels to dry, then  tumble on a medium heat setting (which to me feels very hot) for about 5 minutes.  Based on USDA guidelines for cooking food to high enough temperatures to kill bacteria then letting “rest” 2-3 minutes, I think my 5 minutes in the dryer is good enough for my purposes.

How often to clean

The microbiologist interviewed for the Time article recommends washing kitchen and bathroom towels after 2 days of use, especially if there are young children in the house.  I recommend that you follow the guidance of these professionals.

But, in case you’re wondering, here’s what I do.  Since I currently live in a household with only (mostly) responsible adults, I stretch it a bit.  First, I wash my hands thoroughly to remove as many bacteria and microorganisms as possible.  My kitchen and bath towels go in the laundry every 3 days.  My hand towels in the bathroom get used for 2-3 days, then get turned around.  Basically, when I dry my hands, I only use the part of the towel on the side of the towel bar nearest to me.  The back half of the towel barely gets wet.  So I guess (I need a good way to check this! I smell science experiment…) that the back half of the towel stays pretty clean, so that flipping it around gives me a mostly “new,” clean towel.  Then after another 2-3 days, the hand towels go in the laundry.

Based on my calculations using amount of each ingredient per product, the lowest cost oxygen bleach cleaner is mixing your own sodium percarbonate and sodium carbonate, costing $0.28 per load of towels.  However, OxiClean Baby comes pre-mixed with its own scoop, and costs $0.44 per load of towels.

Do you have any environmentally gently towel washing techniques?  Please share in the comments below!

2 thoughts on “How to wash towels” 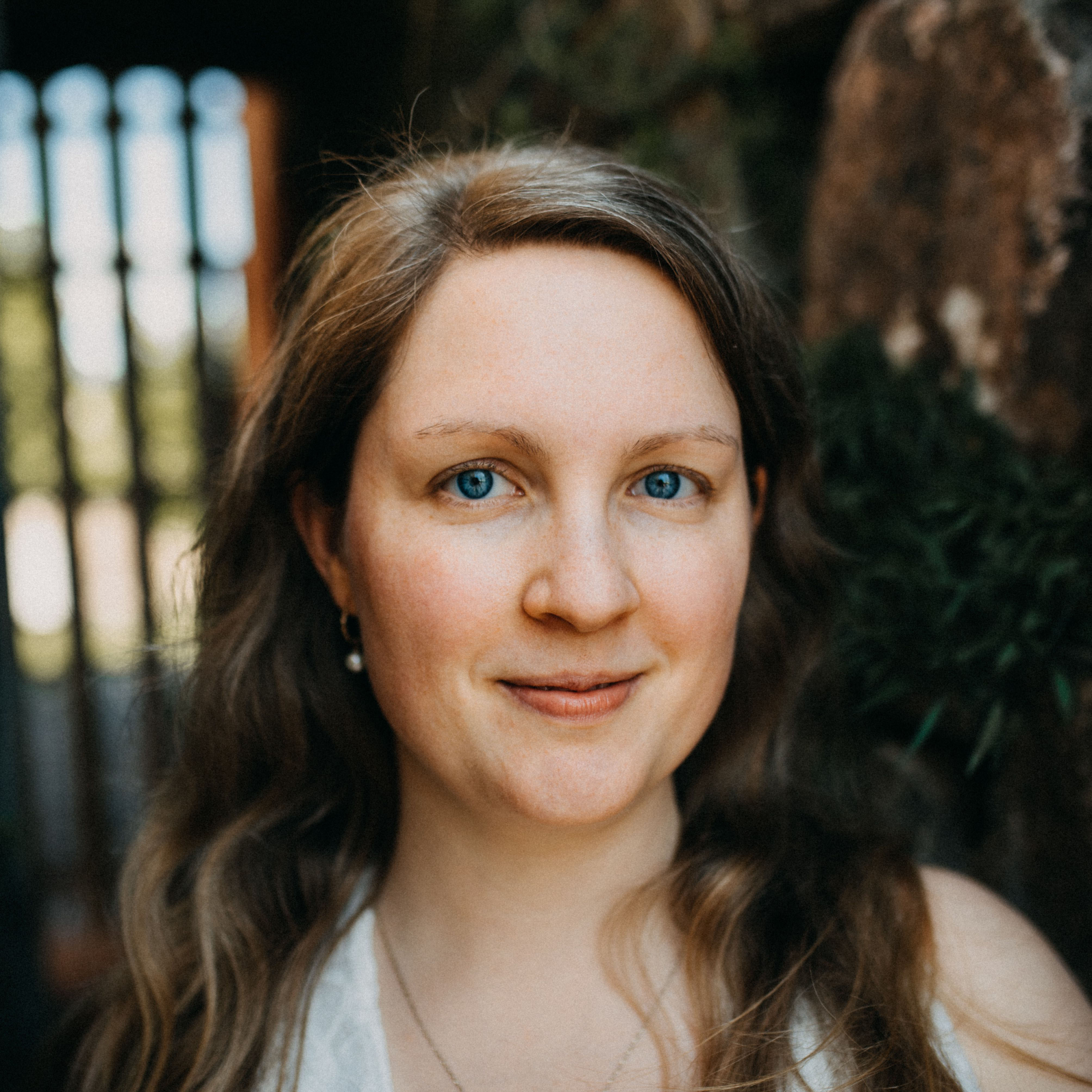